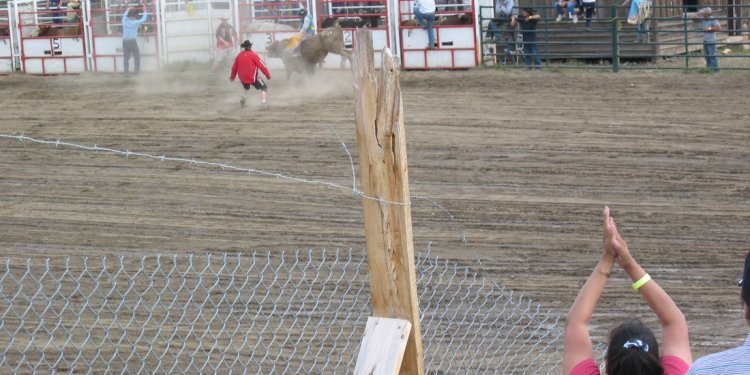 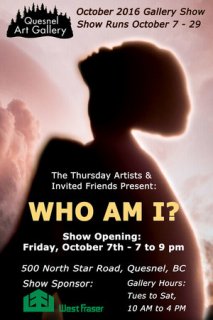 Judith joins her fellow members of Quesnel's eclectic group of Thursday Painters and their Invited Guests in an exploration of personal identity using different materials, methods, and perspectives.

The artists seek to answer the inquiry "Who Am I?" in new and interesting ways. Art works range from personal portrayals to the exploration of broader scenarios.

Visitors to the Quesnel Art Gallery will be challenged and delighted by the possibilities on exhibit.

Possibilities is exhibited at the WILLIAMS LAKE STATION HOUSE GALLERY in the main gallery.

Emerging from her fascination with the Earth in all its forms, Judith DesBrisay’s Possibilities series grew out of her South American experiences. The paintings are, however, based upon sketches made of the luxuriant growth in her Central Interior garden. The Possibilities paintings reflect Judith’s delight when she is immersed in “nature”, a joy made more intense by the imminent threats to its beauty.

The organic shapes of the Possibilites paintings, both monochromatic and vivid in hue, depict the forms, colours, and light ablaze in our lives. The paintings are a celebration of life! 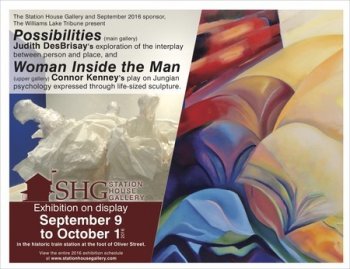 Connor Kenney is exhibiting his "Woman Inside the Man" life sized sculptures in the upstairs gallery concurrent with Judith's paintings on display in the main gallery.

This is the 11th annual exhibition of works wherein artists respond to environmental issues. The 2016 title invites interpretation of “lost nature, human habits or occupations, activities, etc.” Organizer, Jovanka Djordjevich states "As always, consider the medium and the size as part of the message". Opening celebration: Tuesday, April 5, 2016, at 7 p.m.

Quesnel Art Gallery annual February exhibit with various artists contributing to the 2016 theme, Wild Heart.
Gallery of Honour inductees will be noted and their contributions celebrated at the opening reception on Friday, February 5, 2016 from 7pm until 9 pm. Please join us.There are exciting exhibits opening at the Two Rivers Gallery on Thursday, January 28, 2016. The group exhibition, Voice, enlivens the adjacent Canfor Gallery.Artist/activist Bill Horne will exhibit Between the Lines.
Voice displays artworks created with diverse media by artists from across British Columbia. The Two Rivers Gallery called for submissions that explore the "diversity, application and power of the artists’ voice". Judith DesBrisay's painting Within is among the eclectic art works in the Voice exhibit. Other Voice exhibitors are Liz Carter & George Littlechild . Ian Crawford . Victoria Edgarr . Annerose Georgeson & Cat Sivertsen . 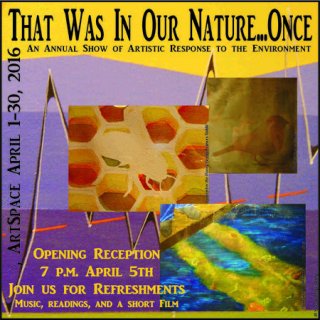 January 28 | 7:30pm Opening Reception and Artist's Talk with Bill Horne After Party to follow at 8:30pm Free for all. Please join us. Refreshments. 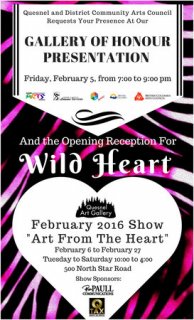 WHO WILL LISTEN TO OUR STORIES? May 3- June 22, 2013
This post is about an important art exhibit "Who Will Listen to Our Stories?" which revolves around an extensive selection of wonderful art works by Sylvia Regehr Graham : Quesnel artist, forester and friend.
Sylvia's sister, Dorothy, has worked with Bill Graham, Sylvia's husband, and other friends plus key persons in Winnipeg to present the exhibit: opening May 3, 2013. The exhibit [May 3 until June 22, 2013] will include art works created by participants of the Art Therapy Program at Cancer Care Manitoba. It will be presented at the Mennonite Heritage Centre Gallery.

Many events impact the life of the arts community and its vibrant members. 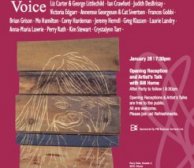 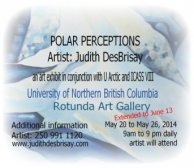 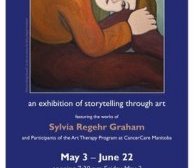 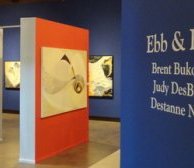